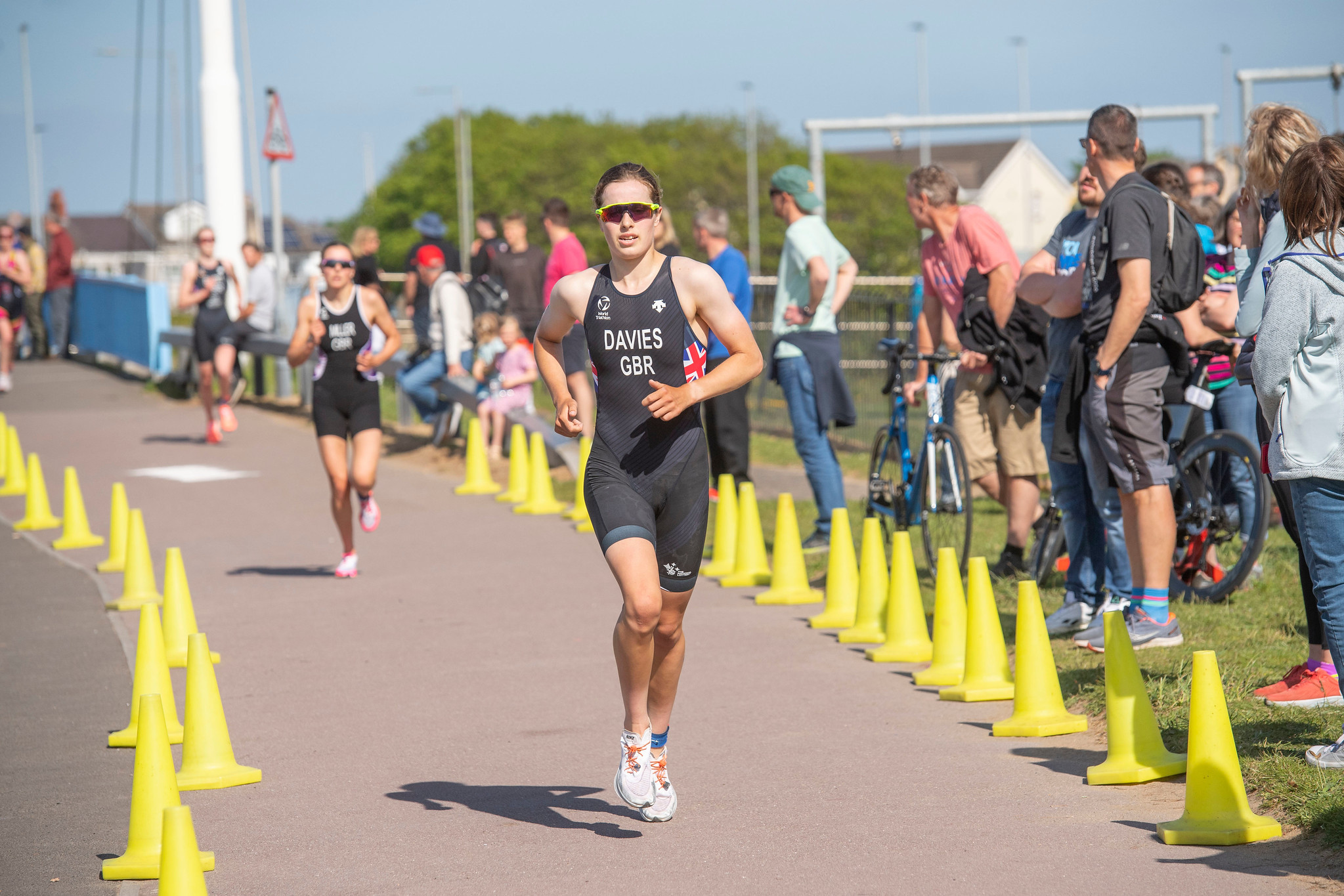 Daisy Davies and Hamish Reilly both moved to the top of the overall rankings in the British Triathlon Senior Super Series, while there were also maximum points for junior athletes Bethany Cook and Straun Bennet in the latest Super Series race at Mallory Park.

In the male junior and senior A final, Hugo Jinks and Tom Hattee were first to head up the ramp to transition one at the end of the 500m swim, but it was out of transition and across the opening laps of the 10km bike where the decisive race splits would be made.

A lead group of three on the opening lap soon grew in size with a front group of six athletes establishing themselves at the head of the race with Reilly, James Chantler-Mayne, Reuben Trotter, Tom Hattee, Jack Stanton-Stock and Lawrence Martindale making-up the lead group.

Behind them, there was a collective effort with some chase groups as big as 10 trying to close the gap to the leaders, but, with the size of the gap and the lead group including strong runners, it would be the six leaders who would battle it out for the race win. That was despite the fast running of Hugo Milner, who showed his athletics speed to post the fastest run split in the final and move through the field having also won his heat earlier in the day.

Back to the head of the race and out of transition it was Reilly, Chantler-Mayne and Trotter who headed out onto the run as the first three athletes. But by the time the athletes passed through the paddock area again, Reilly had opened up a gap on the other athletes, an advantage he would go onto extend over the rest of the 2.5km run to secure the race victory by six seconds.

Speaking after adding the Mallory Park win to his second place finish from Llanelli, Reilly said: “It’s great. It’s my second podium in this year’s Super Series after my second in Llanelli so it’s good to go one up and get the win here.

“I’ve grown up doing the Super Series. I started in Youth, even the IRCs, but never really got a good result when I was young. It’s been a long journey, taking it one stage at a time, but I’m super proud to get my first senior Super Series win here today.”

Behind Reilly, the battle for the rest of the places continued, with each position carrying additional Super Series points. Stanton-Stock passed Chantler-Mayne on lap three of the run to finish second having raced the bike leg on a borrowed bike from Olympic gold and silver medallist Alex Yee following a mechanical issue on his own bike.

Chantler-Mayne, who won last time out in Leeds, completed the top-three to add more Super Series points to his tally.

In the race for the junior positions, with juniors and seniors racing together in the Super Series but earning separate points, Struan Bennet followed-up his aquathlon win at Lochore Meadows with maximum junior points at Mallory Park after finishing as the highest placed junior and 10th overall.

After crossing the line, Bennet said: “It feels really good to be first junior because I’ve had a tough year and it’s good to be back in form. This was only my third triathlon of the year so far, I missed quite a few near the start because I had illness and injuries.

“It’s been a really broken up year and I’ve only had three weeks run training coming into this so it does give me a lot of confidence heading into the rest of the season.” 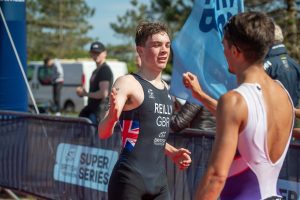 With the current Super Series leaders in the female senior category – Iona Miller and Jess Fullagar – not racing at Mallory Park, with Miller racing at World Triathlon Cup Pontevedra and Fullagar preparing for the Commonwealth Games, there was always going to be a change at the top of the standings.

The racing played out similar to the male A final with a group of six athletes at the front of the race on the bike. Making-up the lead group were Davies, Tilly Anema, Hollie Elliott, Annabel Morton, Ellie White and Katie Rodda, with Libby Coleman, Olivia Logan and junior athlete Bethany Cook the closest chasers behind.

With the group of six heading into transition two together, and with a lead over the chasers, the race was decided by who was the fastest in transition and then during the 2.5km run to the finish.

Quickest in transition, Davies took control at the front immediately, showing no sign of fatigue having won her morning heat by more than a minute. In the final, Davies ended her swim, bike, run with the quickest run split and added maximum points to her overall points tally with the race win.

Anema was next to cross the line, 12 seconds behind Davies, with Anema passing Elliott on the penultimate run lap to secure second ahead of Elliott in a closely fought battle.

After the race, Davies, who will be aiming to defend her British title at the British Elite Triathlon Championships in Sunderland next month, said: “I was quite confident going into it. I knew I would be somewhere near so it’s nice to be able to pull it off knowing the fitness and training I’ve got behind me.

“Coming back from Montreal, a couple of weeks ago, I got a good block of training in so looking to carry that on to Sunderland hopefully and get my title back.”

Bethany Cook – who was part of the world silver medal winning junior/U23 mixed relay team along with Davies – claimed the junior win to cement her place at the top of the Junior Super Series rankings heading to Sunderland. Cook finished eighth overall and was the first junior finisher to pick-up maximum points and record her second Super Series win of 2022.

Reflecting on a busy few weeks, which has included competing at World and European Championships, a Europe Triathlon Junior Cup and now the British Triathlon Super Series, Cook said: “I’ve been travelling a lot this summer so to be able to be back racing with friends at British races has been nice. It’s definitely not been an easy few weeks with the worlds and Europeans around exams, but I love to race.

“Training is fun but it’s races like this where you can go out there and just push yourself and see what you can do. I’ve loved it since I was eight and hopefully for many more years.”

In the junior and senior B finals, junior athlete Jess Sails sailed to victory in the female B final with Sophie Painter second and Jasmine Cooper, the first senior finisher, in third.