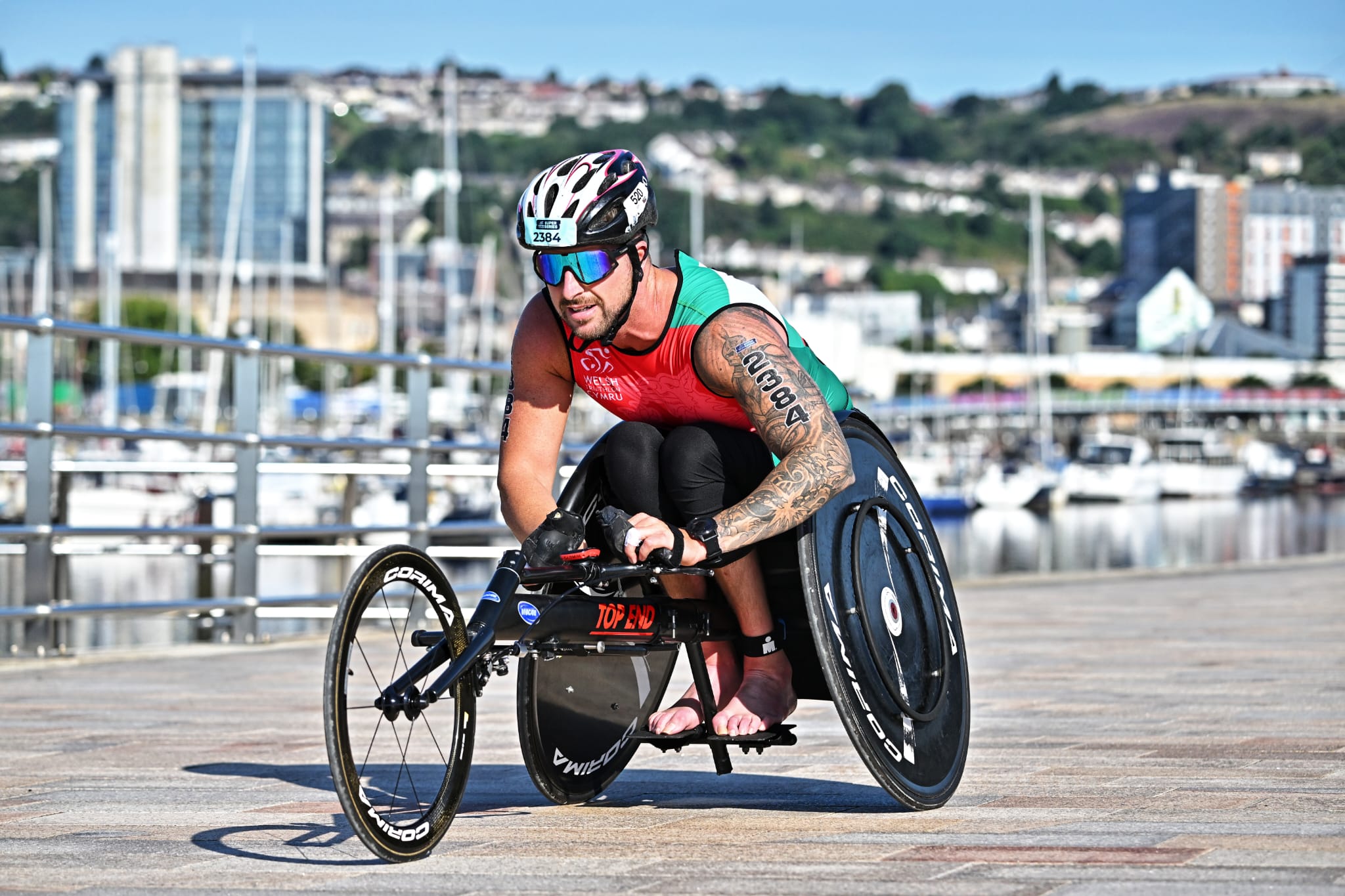 With athletes competing over the shorter super sprint distance, the Super Series course followed some of the WTPS route giving the athletes their own experience of the route and the same finish line the world’s best paratriathletes would race on later in the day.

Crossing the line as the first athlete in the men’s PTWC category was a special moment for Welsh paratriathlete Darren Williams, who headed to Swansea second in the overall Series rankings.

In Swansea, Williams not only secured his first Super Series win of the year but also added maximum points to his total so far which includes two second-place finishes.

“Being a proud Welshman it means a lot to me,” Willaims said. “To have an event like this in Swansea is massive and to be able to have the opportunity to experience it and also the camp earlier in the week I’m really grateful to have these opportunities.

“Being able to race and then watch the world’s best is something really unique and is going to be a great experience. It’s always great fun racing in the Super Series, I love racing in these races and having the competitive opportunities throughout the year.”

Chris Feeley was second in the men’s PTWC, securing his highest finish of this year’s Super Series and adding more points to his overall tally.

Louis Rolfe MBE was one of the first-time Super Series winners to celebrate victory in Swansea with the Paralympic para-cycling champion from Rio 2016 winning the men’s PTS2.

Rolfe only took part in his first paratriathlon at Eton Dorney last month and Swansea provided the first opportunity for him to race head-to-head against other athletes in his classification.

“Being able to race against people really gave me a kick today and made me dig that little bit deeper,” Rolfe said. “Being kicked in the face around the buoy in the swim was a nice initiation but I’m embracing all of it and loving every single second of it.

“There were a few pre-race nerves as per on the start line but once I got in I had my mindset on what I wanted to and I’m glad I was able to execute my plan and push all the way to the finish.”

One of the closest battles of the day came in the men’s PTVI with Ronnie Robinson and his guide Joel Sharman holding off the challenge of Nathaniel Costigan, guided by Jude Whale, to claim his first Super Series win.

With the gap between Robinson and Costigan closing lap-by-lap on the run to within 20 seconds heading onto the final lap, it was Robinson who managed to stay ahead over the final 500m lap to win by 12 seconds.

“It feels amazing to finally get the first win,” Robinson said. “The whole time we were talking and figuring things out, but the main thing was trying to push each other as far as we could to hold on for the win.”

Costigan, who claimed bronze at last month’s British Paratriathlon Championships, crossed the line in second ahead of Matthew Thorne and his guide Paul Seppman.

Women’s PTS4 British champion Shona Brownlee finished ahead of Tammy Barrett to secure victory in the women’s PTS4 in a repeat of the top-two from Eton Dorney.

“It’s a great atmosphere with the whole weekend of events and there’s lots of spectators so it’s a really supportive environment,” Brownlee said. “I’m really pleased to have bagged some more points.

“This is actually the first super sprint race I’ve done so I found it quite tough pacing myself and judging the distances, but it was good fun and when I think back to my first triathlon around this time three years ago to what I’m doing now it’s really great to see how I’m progressing.”

In the men’s equivalent, the maximum points went to David Jones, who after three second-place finishes in the men’s PTS4 so far this year now has 10 more points to add to his total.

Cheryl Went was the winner in the women’s PTS5 adding another maximum points haul after victory at the British Paraduathlon Championships earlier in the year.

“This is my first full year competing in the Paratri Super Series and I’m loving it,” Went said. “This whole event and experience is pretty special, I never expected to do anything like this and the fact you get a little taster of what’s to come later today is really nice.”

The men’s equivalent was won by France’s Antoine Leymarie, who made the trip to Swansea to be classified as well as race in the Super Series race, with Tom Barnard finishing strongly as the first British athlete to claim the maximum points ahead of Jack Green in third.