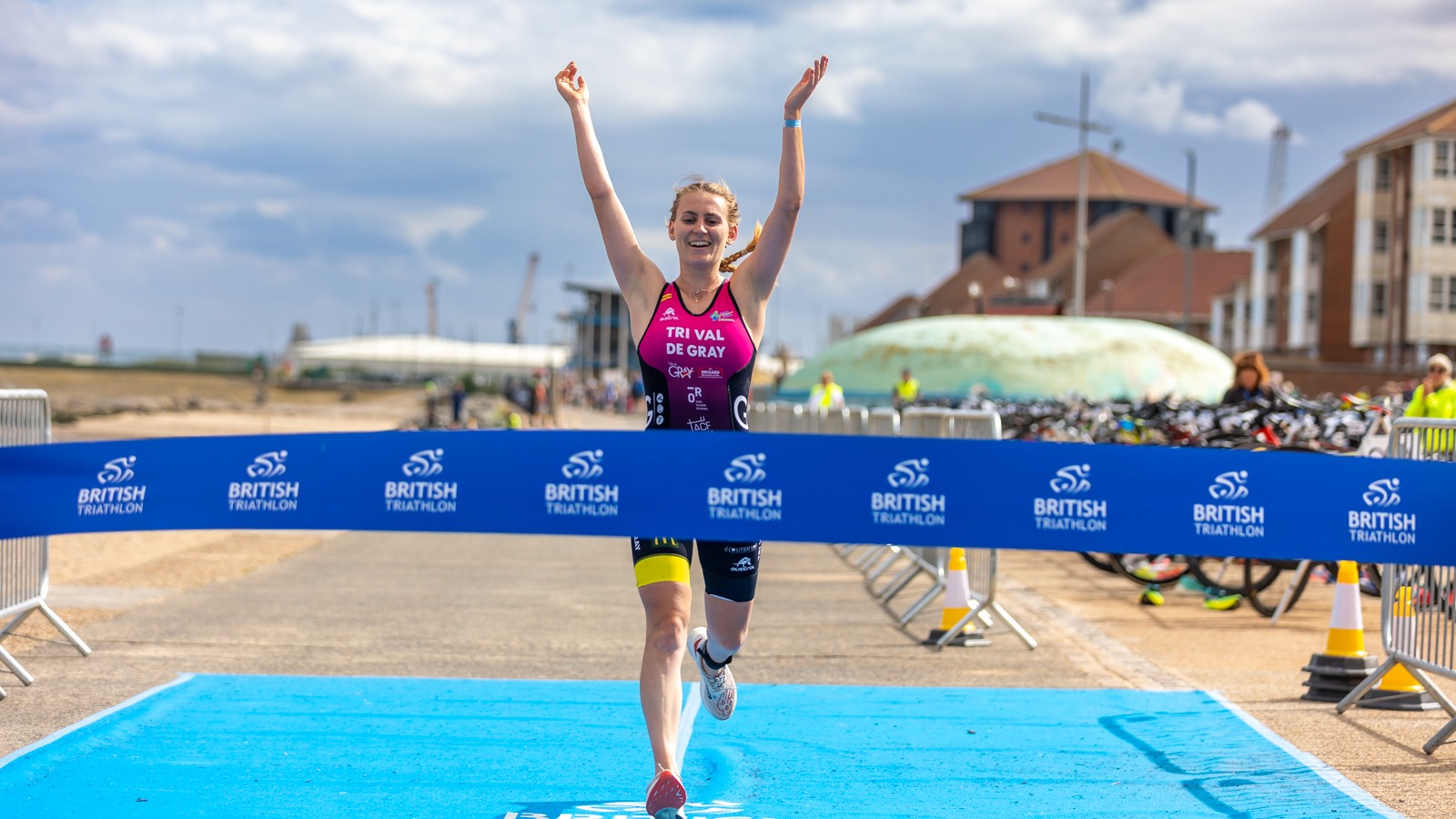 This year is the first time British Triathlon’s biggest domestic event is being held in Sunderland, which also includes the British Elite Triathlon Championships, and the racing on day one of the two-day event was certainly a match for the stunning setting in Roker.

Bringing day one to a close was a thrilling finish in the senior male race, also the British Elite Triathlon Championships, with Bentley and Hamish Reilly battling all the way to the finish line along the seafront.

The top-two from the opening British Triathlon Senior Super Series race in Llanelli again went head-to-head on the run and Bentley came around the outside of Reilly within the final 100 metres to claim this year’s British elite triathlon title ahead of Reilly, who headed into Sunderland top of the rankings in the Senior Super Series.

“That was some race,” Bentley said. “That was probably one of the most competitive races I have ever done, it was brilliant. Every time I made a move he covered it, every time he made a move, I just about got in. It was an absolute stunning race from Hamish, and to be able to compete against someone like that who has quite literally pushed me to my limit.

“It means the world [to become British champion]. I’ve comeback from injury, this is my first race back since Llanelli so for me to be able to pull out a performance like this it gives me so much faith in what I’m doing over in Loughborough at the time and a huge thank you to everyone who has supported me to get me back to this stage.”

Mitch Kolkman of the Netherlands crossed the line third, but the British Championships bronze medal was won by long-distance triathlete James Teagle, who showed his speed and strength to end with one of the fastest times on the run to move through the field.

Jess Fullagar continued her summer of success by becoming British champion to add to her win in the Super Series race at AJ Bell 2022 World Triathlon Championship Series Leeds and then her Commonwealth Games gold medal when guiding Katie Crowhurst at Birmingham 2022.

Just like in Leeds, Fullagar built a significant advantage on the bike, reaching transition two around a minute ahead of the chasing trio of defending champion Daisy Davies, Sophia Green and Katie Rodda.

Davies recorded the quickest split time on the run and did close the gap to the front of the race, but the advantage Fullagar had built still saw the 2019 world junior bronze medallist finish 30 seconds ahead of Davies to win her first British title.

“I really wanted to win this but there are so many strong girls that I didn’t know how the race would turn out, I was so nervous,” Fullagar said. “I knew I was in good form and feeling strong at the moment, so if I wanted the chance against the girls then I needed to send it out of transition and go for it.

“It’s a course that really tests you, but I love it. It’s one of those courses that the strong athletes will come out on top and the bike course is so much fun. To become British champion really is the cherry on top of the cake.

“I feel like I have really turned a corner [this year], I was so so chuffed with my medal at worlds but ever since then it’s been a bit of a rocky road. I have worked hard, but I’m really grateful for the team who have helped me, and I’m really excited for the future.”

Cook, who has competed at the World and European Junior Championships and Europe Triathlon Cup events this year, said: “It’s been so much travelling this season and to be able to come back and finish a season with a win at the British Championships is more than I could have asked for.

“I’m going to America on Tuesday for uni so to be able to finish it on a high note and race with my friends one last time, obviously I’m gutted I couldn’t race with Lizzy [Edge] as we’ve been racing all season together, but I’m absolutely delighted.”

There was a separate junior male race with last year’s world junior duathlon champion Ben Cumberland securing the British junior title, breaking away from a front group of eleven which headed into transition two together.

Cumberland crossed the line 13 seconds ahead of Ryan Symington with Joe Sherman out-sprinting France’s Nils Serre Gehri on the run to the finish line to claim the bronze medal.

Sunderland couldn’t have been much closer to a home race for youth athlete Brandon Pye, living only five miles away from the seafront, and he won the British junior title ahead of silver medallist Harry Maxwell and bronze medallist Senan McDonnell.

“It was an amazing experience, a home crowd, I couldn’t have asked for me,” Pye said. “It was a bit of a different race than what I was expecting but I managed to stick with the front pack the whole way and just give it all I had on the run. A fantastic experience, a fantastic race and a fantastic atmosphere.

“To become British champion was always the aim, but it’s a bit surreal to actually accomplish it especially here in Sunderland getting to showcase what I have been training so hard for throughout the year.”

Gabriella Horne is the British female youth champion claiming the British title in a race which saw the French pair of Lea Houart and Soline Mourgues finishing first and second. Horne was joined on the British Championships podium by Rebecca Van Aardt and Siena Stephens.

The future stars of swim, bike and run were also on full display in the morning races which saw TriStar 2 and 3 athletes compete in the heats to qualify for the finals later in the morning.

The Inter-Regional Championships was an opportunity for some of the best athletes across both the TriStar 2 and 3 age groups in each of the 10 English Regions, Scotland, Wales and Jersey to race against each other.

With each athlete representing their region or country, it was the South East who won the overall Inter-Regional Championships title with 952 points, only six points ahead of second-placed South Central (946 points).

The close racing was a feature throughout the Inter-Regional Championships with a number of close and sprint finishes across the A and B finals. In the A finals, there were individual race wins for Summer Smith (TriStar 2 Female), Ben Beale (TriStar 2 Male), Besty North (TriStar 3 Female) and Henry White (TriStar 3 Male).

The swim, bike and run action continues on Sunday (21 August) with the first ever Great Britain Age-Group Team qualifier in super sprint triathlon, The BIG Swim Bike Run Adult and Family events before the mixed relay provides a thrilling end to the weekend’s competition.

Councillor Graeme Miller, Leader of Sunderland City Council, said: “It’s been a brilliant action-packed day of racing along our beautiful seafront. We’re very much looking forward to doing it all again tomorrow.

“This is the first time the British Triathlon Super Series Grand Final has come to Sunderland. It’s a brand new and exciting experience for our city with a fantastic atmosphere and something for everyone.

“Whether that’s the chance to see some of the country’s best athletes in action or to join in the free fun activities for families in Roker Park, the triathlon promises to be a brilliant day out for spectators and participants alike.