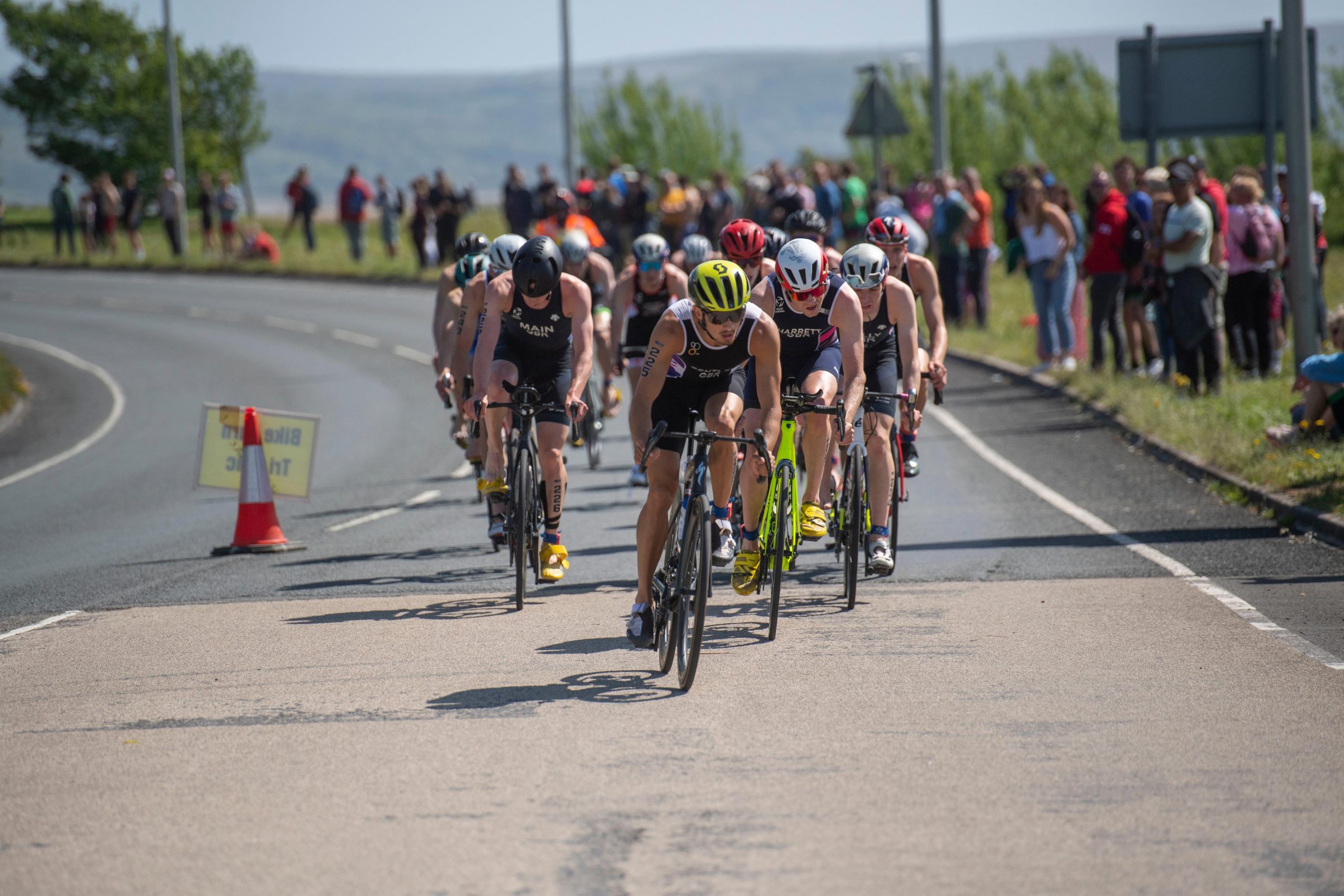 If the opening junior and senior races of the British Triathlon Super Series are anything to go by it’s going to be an extremely competitive year of racing as Connor Bentley, Iona Miller, Bethany Cook and Joe Sherman shone in the South Wales sun.

The junior and senior races included a number of athletes who have represented Great Britain internationally, including at Europe Triathlon Cups this year, and the race at Llanelli Multisport Festival was also an opportunity for junior and U23 athletes to earn selection for international championships being held later this month.

In the junior and senior male tier 1 race, Marcus Dey was the early leader, exiting the 750m swim 16 seconds ahead of the rest of the field. Dey was joined out front in the early stages of the bike by Connor Bentley, but the 20km bike saw three main groups formed, including a lead group of around 15 riders.

On the 5km run, Bentley and Hamish Reilly established themselves as the two leaders, with not much to separate them at the 2.5km mark. On the second half of the run, Bentley began to open up a gap, finishing 10 seconds ahead of Reilly with Iestyn Harrett third in his home race.

Reflecting on his win, Bentley said: “It’s always great racing at Super Series events. It was a great field so it’s a real pleasure to come away with the win. It’s nice because you know everyone and its people you have been racing against for years.

“For the juniors, this sort of racing is awesome for them to get the exposure of racing like this because it’s probably some of the best domestic racing you can find. I’ve moved through the Super Series and now lucky enough to have the opportunity to race at events abroad, but these events are great little sharpeners and sets-up the next month of racing.” 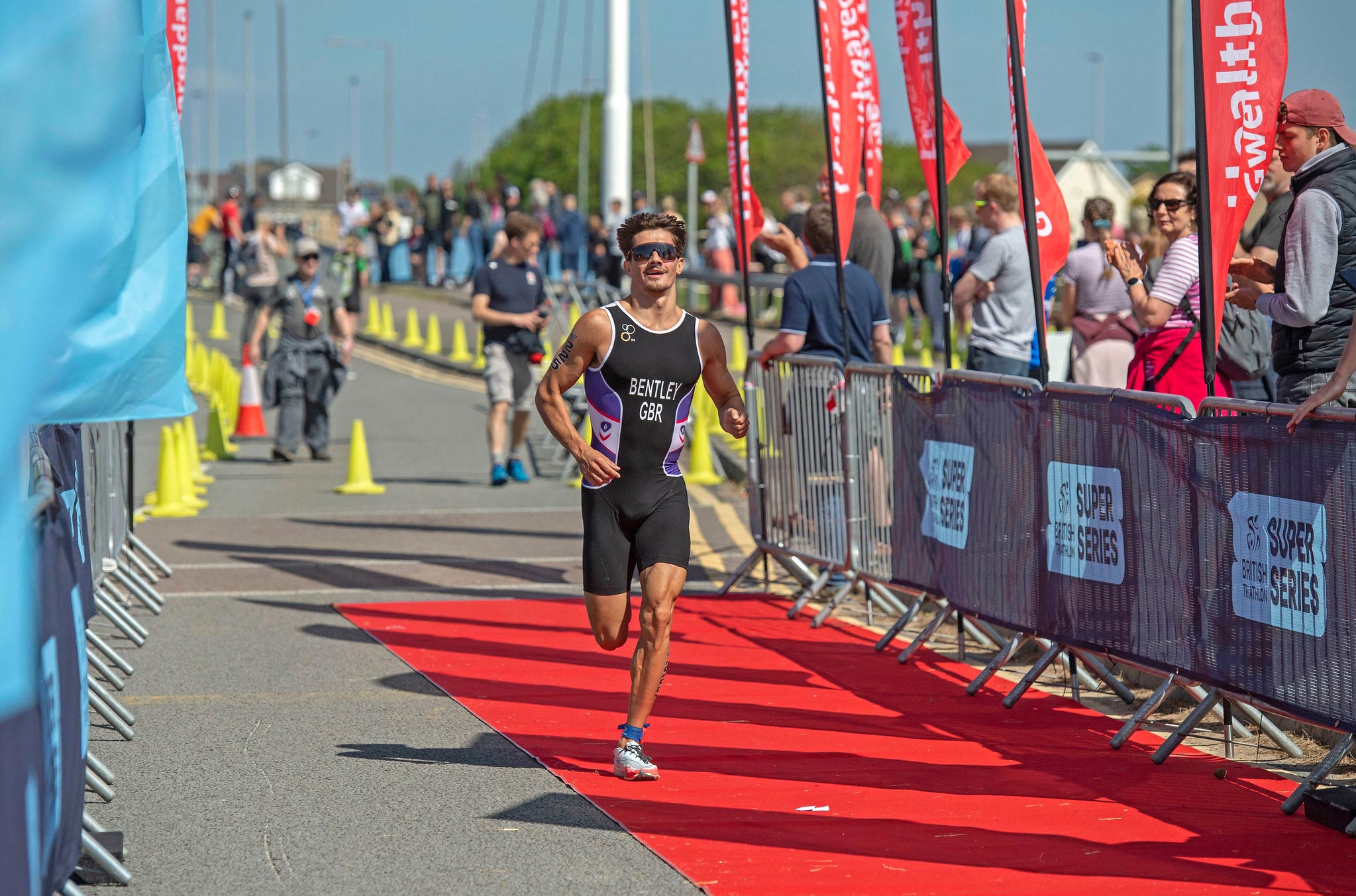 Amongst the senior battle and the race for the overall race win, there was also the battle to earn points in the Junior Super Series, which had the extra dynamic of also being a selection race for the European Junior Championships.

Junior athlete Joe Sherman had positioned himself in the lead group with the next junior athlete Osian Perrin in the chasing group behind. But Perrin showed the running ability that has seen him break UK and Welsh age group records on the track, recording the fastest run split of the day to reduce Sherman’s advantage.

Sherman held off the challenge of Perrin to take the junior win and finish fifth overall, six seconds ahead of Perrin, who was the next junior athlete to cross the line and seventh overall.

After the race, Sherman said: “I was really pleased with my win. It was a very hard race, but I tried to keep control the whole way through and finish it off. I know how fast Osian is at running so I was cautious of him coming up behind me, but thankfully I managed to keep him off until the end.”

In the male junior and senior tier 2 race, senior athlete Thomas Dalgarno took the win, crossing the line eight seconds ahead of senior athletes Henry Bramwell-Reeks, who finished just ahead of Frederik Staal.

Similar to how the other races had unfolded earlier in the day, the female junior and senior race followed a similar pattern of groups forming on the bike and then a battle for places, including the win, on the run.

The women’s bike was a bit more splintered across the five-lap course than the previous races, but a lead group of seven held over 10 seconds advantage over a chase group of three.

Daisy Davies exited transition two with a slight advantage at the head of the race, but Ellie White, Jess Fullagar, Hollie Elliott, Iona Miller, Lily Scott and Sophia Green were all in pursuit.

Davies was still at the front at the end of the first of the two run laps, but was closely followed by Miller, Elliott and Fullagar, who were all within just a few seconds of each other.

As they returned along the Millennium Coastal Path for the final time, Miller increased the speed, passing Davies and opening up a gap all the way to the finish line. Eleven seconds was the winning margin as Miller claimed the win and the 2500 points ahead of Daisy Davies in second and Jess Fullagar in third.

Sharing her thoughts after securing the win, Miller said: “I’m really happy to claim the win. I haven’t raced very well in Llanelli historically so it’s really nice to put that to the side and just have a really good race here.

“I’ve done a lot of Super Series racing over the years, this is my first win in a while, but racing like this does help your development. It’s a good way to practice skills and racing in different ways. We’ve got a really strong group of girls here and the Europeans qualification added that extra level of pressure, so I’m really pleased.” 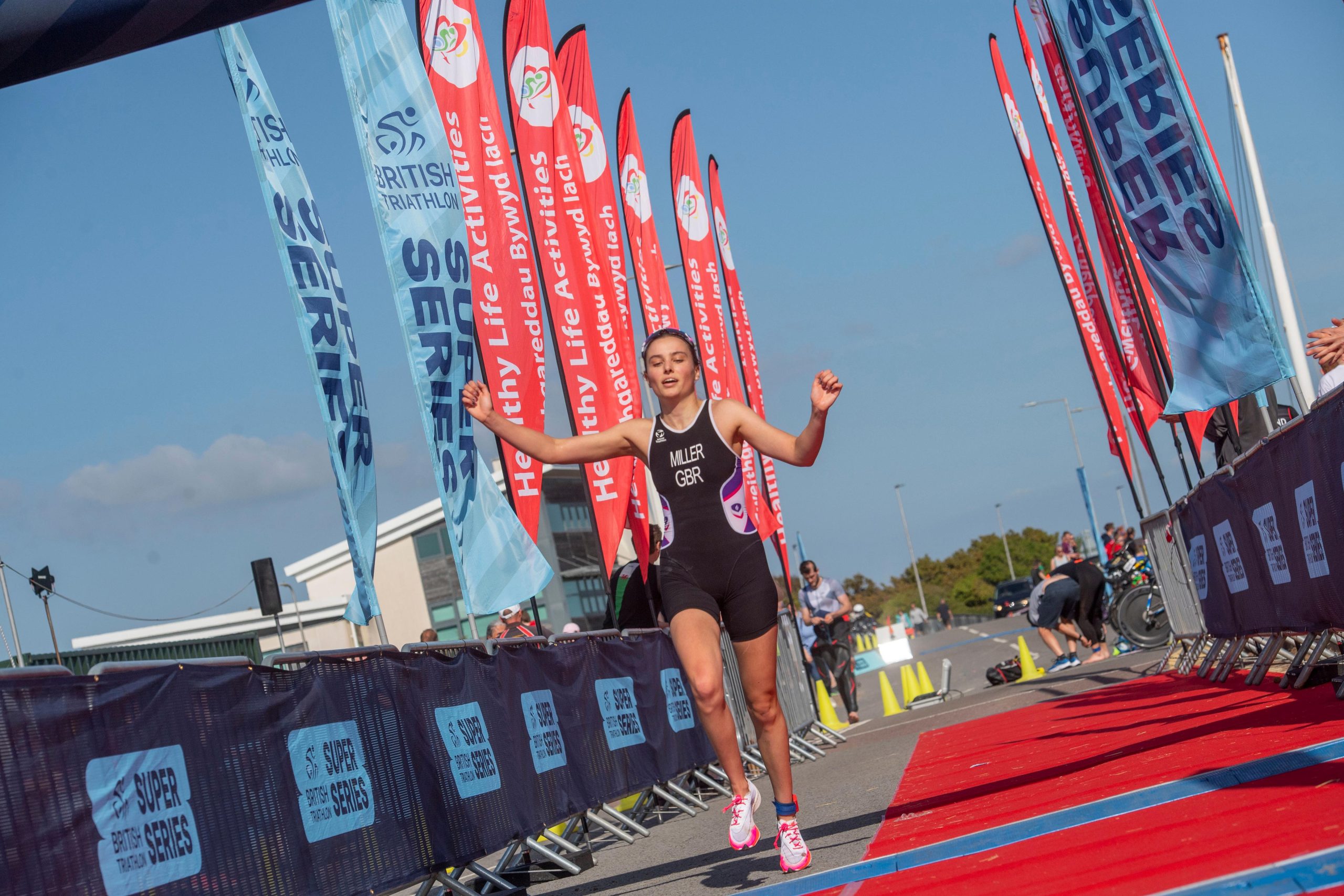 The top-two athletes in the junior race were last year’s Youth B Super Series overall champion Bethany Cook and defending Junior Super Series champion Lizzy Edge, who have both enjoyed some brilliant battles with each other in Super Series races in recent years.

Cook was part of the chasing trio behind the leaders on the bike, which included junior athlete Lily Scott who exited the swim first, while Edge was in a larger chasing group behind.

There was about a 20 second gap between Edge and Cook heading onto the run, with Cook also passing Scott on the run and then extending her advantage over the 5km to secure the junior win and eighth overall.

Edge was next to cross the line, 42 seconds after Cook, with Martha Calton-Seal only a few seconds further behind.

Speaking after the race, Cook said: “I’m so happy, especially after Performance Assessments where everything seemed to go wrong on the run, it was nice to be able to finally put a race together. From start to finish, it was hard, it was not easy at all.

“I’ve been part of this since I was six years old sweeping the courses, my parents are coaches, so I’ve been coming to these since I was little. To be able to finally race them and race with my friends it’s so fun and prepares you really well for any international opportunities we get.”

For Llanelli results and the overall standings, please visit https://britishsuperseries.com/