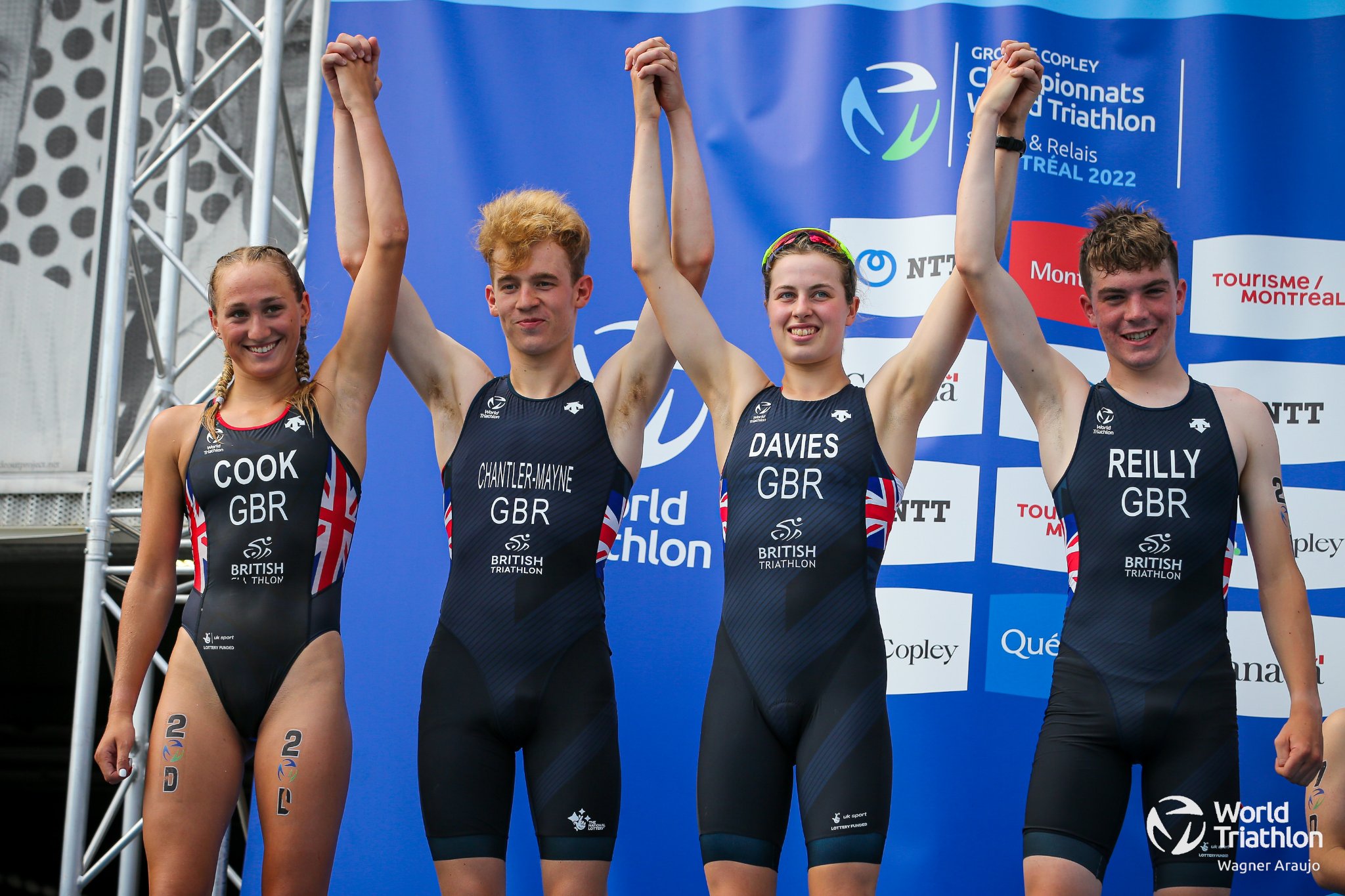 Four athletes competing in this year’s British Triathlon Super Series teamed up to secure silver for Great Britain in the U23/Junior mixed relay at the World Sprint and Mixed Relay Championships in Montreal.

Hamish Reilly, Daisy Davies, James Chantler-Mayne and Bethany Cook combined over the mixed relay format to finish second behind France to claim silver and add a world medal to their individual successes in the British Triathlon Super Series already this year.

Reflecting on the experience in Montreal, the 17-year-old said: “Wow, what an amazing opportunity it was to be a part of the team silver and get a top 10 in the individual, even if it was a duathlon. It was a tough day out there with the level of field, the weather and the fatigue from the individual, but crossing the line and seeing the team and seeing the flag fly on the podium, just meant so much.

“Being able to experience the trip alongside the elites made it that much more beneficial and the whole trip became a massive learning experience. The feeling I got from being part of that trip as a whole was amazing, everyone supported everyone whether you were a junior, U23 or elite. Moving forward this trip has definitely played a big part in my development and it’s a trip I will never forget.”

Cook, who was the first junior finisher in the Super Series race at Llanelli, added: “The Super Series definitely has been a big factor in my development over the years, learning race craft and racing alongside high-level girls on technical and fast courses, definitely helps when you get to a championship race. It’s a lot less overwhelming as you have practiced the processes time and time again, preparing you for the race where it all counts.”

Reilly and Davies are both currently tied third in their respective Super Series rankings after finishing second in the senior races in Llanelli.

Speaking after claiming her first international medal, Davies said: “The overall experience in Montreal was great and highlighted how results are always a team effort, no matter whether it’s a relay or individual result.

“The support from my teammates and support staff before, during and after was amazing. To win silver was a great result and very happy to stand on the podium. It was great to then watch and support the seniors match our successes a few hours after our relay.

“The Super Series is a great stepping stone for any budding young triathlete, having raced as a first year youth to then representing GB at World and European Junior Championships and moving onwards to U23/senior racing with confidence having gained plenty of racing experience during Super Series races over the years.”

Chantler-Mayne is currently the joint-leader in the male Senior Super Series and travelled to Montreal off the back of his first senior Super Series win at AJ Bell 2022 World Triathlon Championship Series Leeds.

After returning from Canada with a world silver medal, Chantler-Mayne commented: “It was an excellent experience, seeing how the senior athletes operate around a World Series race. There was a great atmosphere during and around the race with lots of support. It was a good team performance to get silver behind a very strong France team, so I’m very happy with the outcome.

“The Super Series offers high quality racing opportunities relatively close to home. The races have really helped me to get race sharp and hone my skills.”